Tuesday, April 7, 2015, at 15:00, at the Danube Delta Eco-Tourism Museum Center, 14 November Street, no. 1, the photo exhibition DANUBE, DOBRUDJA, DELTA has been opened.
We quote the organizers:

Geographical location, historical, spiritual and ethnic features make the picturesque Dobrogea the most attractive  and interesting place of Romania. Its various landscape and local legends have always fascinated those who have passed through this land, be it travelers, invaders, locals or artists.

The Exhibition Danube, Dobrogea, Delta brings together a selection of 60 color photographs made at different times of the year, reflecting aspects of the natural heritage of Tulcea County: landscape, flora, fauna, focusing on rare and protected habitats and species. Authors photos are recognized for their professionalism and love for Dobrudja’s nature: Mihai Baciu, Iliuţă Goean, Valeriu Leonov, Daniel Petrescu, Mihai Petrescu.

HE and SHE in the animal world

During the period November 2014 – October 2015, Danube Delta Ecotourism Museum Center, November 14 Street no. 1, the public is invited to view the temporary exhibition He and She in the animal world, organized in partnership with Grigore Antipa National Museum of Natural History Bucharest.

Exhibits are mammals, birds, amphibians and insects belonging to the collections of the organizers.

What the organizers say:

In the animal world, there are always the HE and SHE, male and female, the two precursors of life.

Sex differences varies greatly from species to species, but are found within the same species also. These differences appear to be an adaptation to sexual selection, reflected in colors and exotic plumage or in battles for dominance reflected in the size or the presence of body parts used in these confrontations.

In terms of size and behavior differences between male and female varies, but without rule. In insects, spiders, fish, birds of prey and mammals, there are species in which females are larger than males. In some species, the male contribution ends when mating, whereas in others, the male takes care of the offspring.

The exhibition includes 36 pairs of the various species and living environments … some of couples of the living world in which we find differences between male and female.

Between April 21 and May 28, contemporary art lovers are expected at the Fine Arts Museum,  Antipa Street, No.2 and Avramide House, Progresului Street No. 32 to take part in special event in the art world, the second edition of the ”AEGYSSUS” National Biennale of Contemporary Art.

By Cătălina PopaAnnouncements | No Comments

The temporary exhibition named ROMANIAN AND FOREIGN COINS AND BANKNOTES IN THE  TULCEA MUSEUM’s  COLLECTION, opened on Friday, March 27 at the Museum of History and Archaeology located in the Independence Monument Park has as purpose to highlight  the evolution of the Romanian leu in the period between 1866 and 1947 and to present the foreign coins / banknotes which circulated in Romania at that time.

The exhibits show the Romanian leu progress: the first attempts during the reign of Alexandru Ioan Cuza and then the Kings period: Carol I, Ferdinand, Charles II and Michael I of Romania. 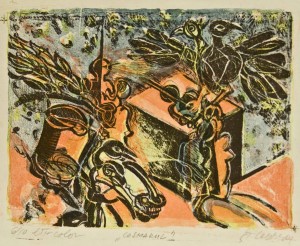 In April, at the Fine Arts Museum, 2, Antipa Street, the public can watch the work of Stephen Iacobescu, „Nightmare”, belonging to the collection of modern and contemporary painting.

Stephen Iacobescu (1937 – 2001) was a Romanian illustrator and engraver of the twentieth century, a member of the Artists Union of Romania. During his life he opened a few exhibitions, but participated in competitions and international events in the field of graphic arts. It was a discreet presence, characterized by a profound modesty, but remarkable in the Romanian engraving. He among those who supported the existence of the Engraving Workshop, the place that has stimulated significant achievements during the 70s in the engraving art.  Among his favorite themes are found: the history, traditions and Romanian folk customs, everyday scenes. He taught in secondary education, as art teacher.

In addition to personal exhibitions, the artist has participated in exhibitions of contemporary art works and exhibitions of drawing and engraving, both at home and abroad, works which have received critical acclaim and audience.